Skin grafts are used when a wound cannot be closed effectively by pulling and stitching the existing edges together. Too much tension on the skin will cause the wound edges to breakdown. Alternatives to skin grafts are treating the wound as an open wound and letting it heal by second intention or in some areas, you could do a skin flap instead.

Where does the graft skin come from?

The graft skin is usually always from the same animal, you could technically use skin from the same species of animal, but it will almost always be rejected. However, this technique would provide temporary wound coverage for large, burned areas of skin.

The graft is usually taken from either the lateral thoracic wall, shoulder or back as these areas have plenty of loose skin - the wound made from taking the graft must also be able to close.

Mesh grafts contains slits cut into the skin. This allows drainage, flexibility, conformity and expansion. A full thickness, non-expanded mesh graft is recommended in most cases as meshing allows the graft to drain. With good management you would typically expect 90-100% graft survival when applied on healthy tissue with good management.

The bandage acts to immobilise the graft, absorb fluid, aid graft adhesion and protect the graft from trauma. Frequency of bandage changes vary depending on the wound from daily to every 3-4 days for at least three weeks.

Graft colour changes over the first week, pale to begin with, then blue/black on days 2-3 as haemoglobin products are absorbed. A light reddish tinge appears around day 3-4 with the entire graft returning to a red colour by days 7-8. Areas that remain pale have not established an adequate blood supply and may turn necrotic. 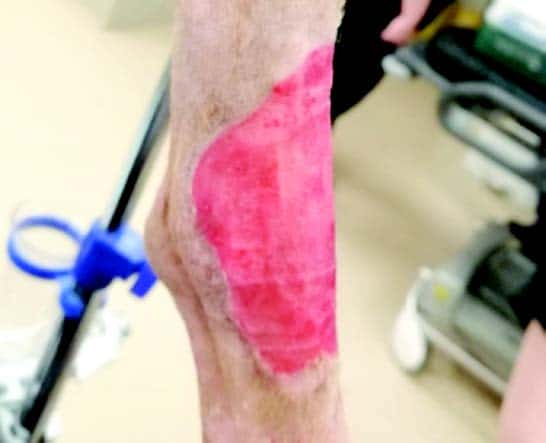 The pictures shown on the left are of Harvey, an 8 year old Collie.

Harvey needed a skin graft after having a large mass removed from the front of his hock.

The wound left was too big to close normally and so a graft of skin was taken from his flank to close the wound.

Harvey had a screw placed to immobilise his tarsal joint, this was removed once the graft had fully attached.

Capillary action from the graft bed into the dilated graft vessels initially nourishes the graft. The absorbed fluid diffuses into the tissues of the graft and the graft develops oedema.

After the first day the vessels from the graft and the graft bed follow the fibrin bonds and start to meet and anastomose (stick together). 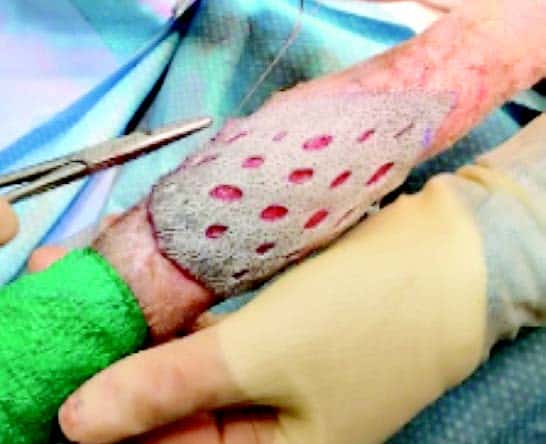 Delicate fibrin bonds hold the graft in place, this adherence allows the otherwise impossible task of revascularisation and organisation to occur.

Blood flow is slow and disorganised but slowly improves, approaching normal by day 5-6. Any fluid accumulation between the graft and graft bed will slow this process down.

There is also an ingrowth of new vessels from the graft bed into the graft in the same time frame. 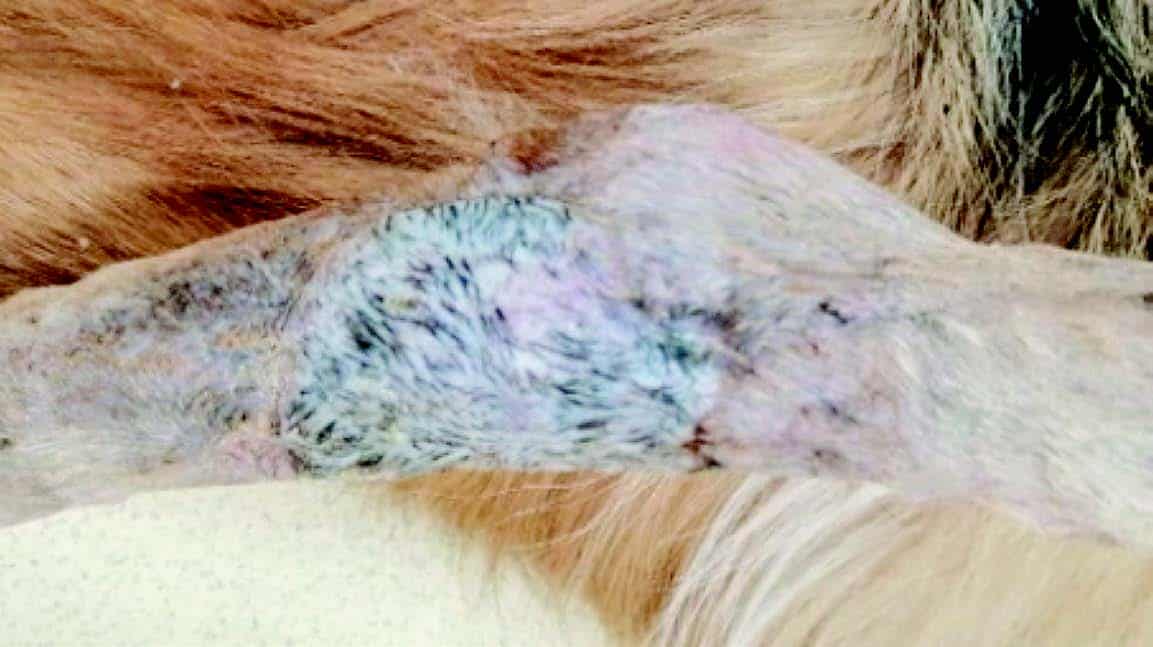