NSAIDs, when to use them and when to avoid them 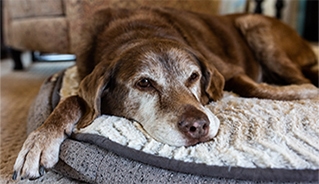 There are two distinct isoforms; COX-1, and COX-2.

COX-2 intensifies the inflammatory response by forming prostaglandins that sensitise the peripheral nociceptors leading to localised pain and hypersensitivity.

The most common type of adverse events associated with NSAIDS are those involving the gastro-intestinal (GI) system. This is because of the inhibition of some constitutive prostaglandins which are involved in the protection of the gut mucosa by the following mechanisms:

Gastro-intestinal erosion, ulceration or perforation can occur in animals which have previously had no signs of GI adverse effects.

Risk factors for developing GI toxicity with NSAID use are:

Because both COX-1 and COX-2 are present in normal kidneys, any type of NSAID, whether COX-2 selective or not can cause renal toxicity or exacerbate renal insufficiency. This is due to the effects on prostaglandins which regulate renal blood flow. At times of hypovolaemia, dehydration, or hypotension the kidney relies on prostaglandins to preserve renal blood flow, and NSAIDS should be avoided in these situations. 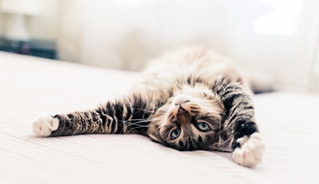 Prescription of NSAIDs in animals that already have renal insufficiency should be carefully considered as the use of NSAIDs has the potential to exacerbate the renal disease. The animal must be hydrated, and not hypovolaemic or hypotensive.

Gastro-intestinal erosion, ulceration or perforation can occur in animals which have previously had no signs of GI adverse effects.

There is evidence in cats with stable chronic kidney disease, that long term meloxicam (Gowan et al. (2011)) OR robenaoxib (Kongara & Chambers (2018)) analgesia at a low dose can be used to treat pain associated with degenerative joint disease without causing a progression of the renal disease.

Practical suggestions for starting the chronic use of NSAIDs in an animal with chronic kidney disease are as follows:

All NSAIDs are metabolised in the liver, and drug-induced hepatotoxicity is a serious but rare complication. In dogs, it has been reported after repeated use of carprofen producing a cytotoxic hepatocellular reaction. There is less evidence of hepatotoxicity in cats.

To support a diagnosis of hepatotoxicity, a three to four fold increase in hepatic enzymes above baseline within the first few days (up to two to four weeks) of starting NSAIDs alongside resolution of clinical signs and elevated biochemistry values after discontinuation, would be observed. Elevated baseline liver enzymes (e.g. those often seen in geriatric animals) are not a risk factor for developing a hepatotoxicity. If long term prescription is anticipated, baseline liver enzymes should be measured and then monitored after two weeks, and then periodically thereafter.

Use of NSAIDs with concurrent medications

The use of the following medications should be avoided with concurrent use of NSAIDs:

In general, NSAIDs are effective analgesics and play an important part in the multi- modal approach to analgesia, especially if there is an inflammatory component to pain.

They should certainly be considered in patients that have:

For more information or to speak to one of our specialist Anaesthetists please call 01823 653510.