A young Springer Spaniel has sprung back to his best after undergoing an extensive reconstruction surgery.  One-year-old Billy injured himself running around his owner’s garden and was referred to us at Cave.

Head of surgery Malcolm Jack, a specialist in small animal surgery, took charge of the case and revealed the dramatic extent of the damage and the detailed reconstructive work required to repair it. 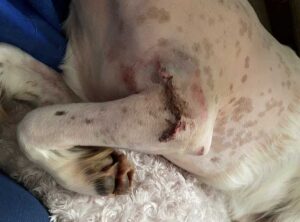 He said: “We carried out a CT scan of Billy’s elbows which showed a humeral condylar ‘Y’ fracture in the left elbow and revealed the right elbow had a partial humeral intercondylar fissure, which can cause pain and lameness and predisposes the bone to fracture.

“During surgery, we reduced the medial fracture fragment to the proximal humerus. This fragment was temporarily stabilised with 1.2mm K-wire and bone reduction forceps. 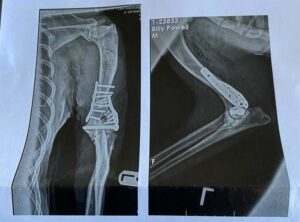 “Billy was then repositioned to allow the lateral fracture fragment to be approached. It was flipped out and a 4.5mm drill hole made from medial to lateral.

“The fracture was again reduced and the trans-fragment drilled with a 3.2mm bit and a 38mm 4.5mm cortical transcondylar screw placed in a lag fashion.

“Then a 2.7mm LEAP plate was put in place with three screws proximal and three distal to the fracture line.”

Malcolm decided not to perform surgery on the fissure in the right elbow, preferring to monitor the situation for now.

He added: “I have recommended we allow Billy to recover from this surgery and if lameness is observed in the right forelimb in the future, then a transcondylar screw should be placed in the right elbow.

Billy’s owner Rachel Powell, from Bristol, is full of praise for the expert team at Cave and especially specialist Malcolm. 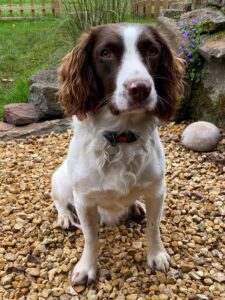 She said: “Billy broke his leg running in our garden and we were very upset and concerned about the bad fracture and the future for Billy as he is so young.

“Malcolm was confident he could repair the fracture so we felt at ease leaving Billy with him for surgery.

“He was there for three days and when he came home, we had to do six weeks of strict crate rest, then a programme of increased activity over the following four weeks. It’s now three months post-op and he has recovered really well.”