A beloved family pet who defied the odds to recover from a possible COVID-19 infection is back carrying out her remarkable work acting as a diabetic detection dog for her grateful owner. 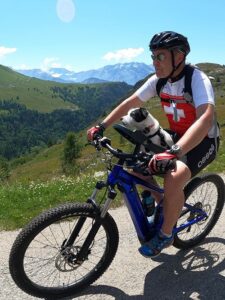 Daisy, an eight-year-old Jack Russell cross, was adopted by Pete and Mo Murden, from Exeter, when she was four and immediately showed she was worth her weight in gold to diabetic Pete.

Just three days after being adopted, Daisy started scratching Pete’s leg and wouldn’t stop, leading him to test his blood sugars, which were low. As soon as he took some glucose, Daisy stopped scratching and went back to playing around the house.

The beloved family pet has been acting as Pete’s early warning system ever since, as she can detect low blood sugars before he can. 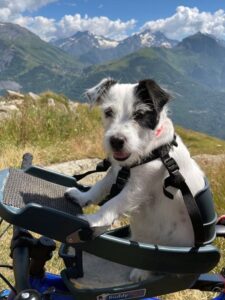 That vital link is still in place thanks to the ongoing care provided by Cave, where Daisy was referred last summer with constant coughing, wheezing, shortness of breath and vomiting.

After detailed investigations, clinical director and internal medicine specialist, Nele Van den Steen diagnosed Daisy with a consolidated right cranial lung lobe, a condition which can cause the severe issues she presented with.

However, Nele said the cause of the condition was unclear – and that COVID-19 could not be ruled out. Evidence has shown COVID-19 can be transmitted to dogs but there is no evidence they can spread it to humans.

Pete said: “Daisy had constant coughing, loss of smell and taste, loss of appetite and a raging temperature, all symptoms of COVID-19. She went from being a healthy, active bundle of fun and energy to a sick, lethargic poorly dog in a few hours.

“She used to run and play for hours every day and follow us everywhere, then within 24 hours she hardly had the strength to walk into the garden.

“Nele initially thought it a very aggressive tumour in her lungs, pneumonia or something equally serious. We were devastated and so worried. We’d never felt so helpless.

“She deteriorated further and we took her back for a lung wash. Nele had explained the risks but we wanted to do everything to try and save Daisy.”

The Murdens had a holiday to the French Alps booked and Nele suggested they take Daisy and enjoy what could have been her last few weeks, armed with a large supply of medication. But after many long walks in the mountain air, Daisy’s symptoms subsided and she is still loving life 12 months later.

“Daisy is a bundle of joy and travels everywhere with us,” added Pete.

“Cave’s care, dedication, treatments, lung wash, medication, skill and devotion to looking after animals saved Daisy. The clean pure mountain air in the Alps also helped to heal her lungs. We couldn’t believe the scans when we took Daisy back to Nele for a check after the holiday. Her lungs were clear!

“Nele, her team and everyone at Cave, plus the initial care and referral from primary care vets in Exeter, certainly saved Daisy. They all worked miracles.”

Nele said: “This was a really interesting case which we’re delighted had a happy ending. It’s great to see Daisy still going strong a year on from when we first treated her.

“While we were able to make a clear diagnosis, I am still not clear regarding the cause of Daisy’s issues.

“Her almost-complete response to steroids would suggest that a bacterial or fungal pneumonia is excluded, and the same would count for a primary lung tumour. Temporary improvement with lymphoma would be possible but it would be highly unusual to be this long-lasting.

“Also, although no COVID-19 pneumonia in dogs had been reported previously, we could not rule it out.”