A fun day by the sea turned into a horror outing for a Torquay dog owner after her precious pet swallowed a carelessly discarded fish hook. 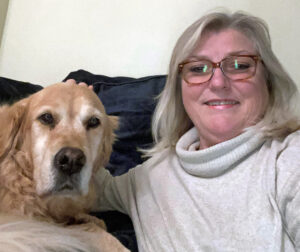 Alison Benney was out walking her twelve-year-old Golden Retriever Harvey at Goodrington, near Paignton, on Sunday, February 28, when the traumatic incident happened.

Luckily, our expert vets managed to extract the hook from Harvey’s oesophagus without needing to operate.

Alison said the incident had left her extremely upset at the person responsible for dumping their rubbish so irresponsibly.

Alison said: “I’m very angry about the whole thing. It was a very upsetting experience for me and especially for Harvey.

“We were walking down the cliff walk onto the promenade which leads to Goodrington Sands, when Harvey suddenly started rummaging in a discarded carrier bag and the next thing he was gagging and clearly distressed.

“I could see he had some fishing line hanging out of his mouth and realised he must have swallowed some baited fishing hooks that had been thrown away.

“I tried to gently pull on the line to get it out but the hook must have been caught in the flesh down his throat and it wouldn’t come out.

“That’s when I decided to take him straight to our local vets, Dartvale in Totnes, who, after assessment and X-rays realised that the fish hook was lodged in Harvey’s chest and immediately referred us to Cave.

“Thankfully they were able to remove the hook without having to operate.

“Goodrington promenade is a very popular spot where people fish into the sea but anglers should realise just how dangerous fish hooks and fishing line can be and make sure they dispose of them properly.”

Harvey’s problem was combated by Nele Van den Steen, clinical director at Cave, who said: “When Harvey arrived, we were told that he’d swallowed a baited fish hook earlier that day and it was stuck in his throat.

“Radiographs confirmed the hook was lodged in his oesophagus but we hoped that using an endoscope, a thin tube equipped with a camera, light and including a channel to allow access for miniature tools, would help us remove it without the need for surgery.

“It actually proved more difficult that we thought but ultimately we were successful and managed to free the hook and remove it.

“Harvey was kept in overnight for observation but allowed home the next and has now made a full recovery.”

A relieved Alison added: “Nele at Cave was very professional and caring. She was very clear in explaining the procedure and very optimistic that it would work which was very reassuring.

“Harvey’s back to normal already so I’m very grateful to Cave for all their help and care.”