We are open, click here for our COVID guidelines.

A young puppy with a life-threatening heart defect is now looking forward to an upbeat future after specialist vets saved her life – twice!

Elke, an adorable German Shepherd puppy, was born with a severely obstructed pulmonary valve, which could have caused a fatal heart attack at any moment.

She was initially referred to the HeartVets cardiology team in Devon for investigation of her loud heart murmur, where it was confirmed that she was in need of an operation to open up a very narrowed heart valve which was putting her heart under great pressure. Jo Harris, a specialist in veterinary cardiology, explained: “Elke was immediately started on atenolol, which is a beta-blocker, to try to reduce her cardiac workload and reduce the chance of a potentially life-threatening arrhythmia (erratic heartbeat).

Elke was then admitted here at Cave Veterinary Specialists,  where the HeartVets cardiologists work closely with the other Cave specialists.

“We performed a pulmonary balloon valvuloplasty, which is keyhole heart surgery to insert a catheter into the blocked valve to stretch it open.

“This type of surgery is extremely tricky due to the technical challenge of moving catheters inside a very thickened, small heart.

“Despite these challenges and difficulties, the procedure was a success and the valve opened up well.”

With Elke’s potentially fatal heart defect resolved, the young pup should have been out of danger.

However, Jo revealed the case then took an alarming twist which once again put the four-month-old pet in perilous danger.

“This is where a very thickened heart can suddenly contract more easily due to the relief of pressure after a successful operation.

“Elke’s heart started to collapse inwards, causing worsening obstruction to her pulmonary flow and reducing the filling of the left side of the heart, leading to hypoxia (lack of oxygen) and circulatory shock.

“She became critically ill and Jo, together with our anaesthetists and overnight team worked around the clock to stabilise her. 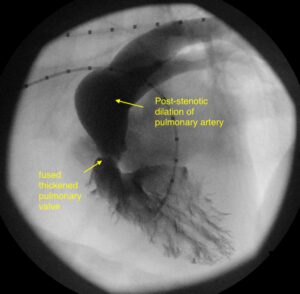 Once again, Jo and the Cave team’s expertise saved the day and Elke has now come through her traumatic experience.

Jo admitted: “It was a very intense and challenging time but we are hopeful we will have helped Elke to now live a happy, active life.”

Delighted owner Mr Otty, from Teignmouth, Devon, was full of praise for the lifesaving care Elke received at Cave.

He said: “Elke is making a great recovery. As anticipated, the main worry is that she’s tearing around the place like a lunatic!

“Our grateful thanks go to Jo and her team for the magic they worked on Elke. She is still doing brilliantly and enjoying going out on short walks now.”