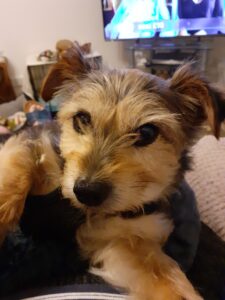 The story of the remarkable recovery of a paralysed dog which had suffered a stroke has been revealed by her grateful owner.

Barbara Julian, from Helston in Cornwall, feared the worst when her nine-year-old pet Poppy became completely paralysed in a matter of hours one morning.

However, a caring collaboration between a specialist vets, an animal physiotherapist and an animal hydrotherapist – plus dedicated 24/7 care from Barbara – has all helped Poppy return to normal.

Things did not look promising, though, when the Yorkshire Terrier-Jack Russell cross was referred for expert care here at Cave Vets.

Tom Cardy, a RCVS and European specialist in veterinary neurology, said: “When Poppy arrived she was unable to stand or move herself around.

“We quickly identified that she had a problem in the spinal cord of her neck that was preventing signals from her brain reaching her legs.

“An MRI scan showed that Poppy had experienced a stroke-like event towards the top of her neck which had caused these severe neurological signs.

“Treatment of stroke-like events such as Poppy’s cannot be achieved through surgery. The solution is extensive physiotherapy and rehabilitation so that was our sole focus.”

Poppy spent six days at Cave and regained a small amount of movement in her right front leg and was able to lift her head.

A long-term treatment plan was necessary to ensure continued improvement so  Barbara was given a series of physiotherapy exercises to help Poppy regain even more movement.

“That level of love, care and attention for Poppy saw her regain the ability to stand and walk within three weeks.

“Her progress has been astonishing and she is now bright, happy, enjoying life and running again. Her recovery shows that non-surgical spinal cases, even the most severe ones, can make fantastic recoveries with the appropriate support.

“It also highlights the importance of a collaborative approach with physiotherapists and vets across the South West and this is an ethos that we actively try to pursue within the neurology team at Cave.”

Barbara is full of praise for the work of Tom, Nicky and Taya in helping Poppy make such a wonderful recovery. 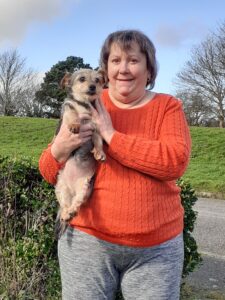 She said: “I honestly thought I was going to lose her, but Poppy had other ideas. She wasn’t ready to give in.” Barbara, who is partially disabled and was shielding because of the Covid-19 pandemic, admits it was a traumatic time when Poppy became unwell.

She added: “Poppy’s front left leg buckled under her so I carried in her in and rang my local vets for emergency appointment. Three hours later she was almost completely paralysed and I was panic stricken when my vet Siobhan McInernay said she needed to be referred to Cave for specialist care.

“It’s 130 miles away and I was shielding at the time so unable to go but my friend of 50 years, Karen Bickford-Smith and her husband Peter dropped everything to rush Poppy from Cornwall to Somerset for me.

“At that point I really didn’t think I’d see Poppy again but she’s gone and amazed everyone with her recovery. Nobody can quite believe it.

“There’s so many people to thank, like Karen and Peter, for taking her to Cave and to Tom Cardy who was absolutely marvellous and very dedicated.

“He kept me calm and communicated so clearly. I followed his aftercare letter very carefully and four or five times a day I put Poppy on my bed and did all the massage, moving and gently stretching her legs first one side then the other.

“I thought Poppy would never walk again but after about two weeks I felt her start to resist and pulled her leg away. After that breakthrough she improved every day.

“Overall it was a real team effort and I’m very grateful to my local vet Siobhan, Nicky the physio and Taya who persevered so hard with the hydrotherapy. They were all wonderful.