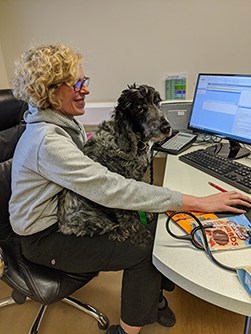 Ollie is a 10 year old cocker spaniel. When his owners noticed a lump on his foot in December 2016, they took him to their local vet. During examination, enlarged lymph nodes were identified from which samples were taken. Tests returned with a diagnosis of lymphoma and a referral was made for Ollie to receive further testing, imaging, treatment options and indication of prognosis.

Canine lymphoma (lymphosarcoma) is a cancer arising predominantly in the lymph glands of the body. In some dogs, this may occur at only one or two sites in the body but, more commonly, it is widespread involving all the lymph glands and internal organs. Lymphoma is a progressive and ultimately fatal disease unless treated. In the early stages, the patient may appear well but the cancer can cause weakness, poor appetite, weight loss and general poor health.

Without treatment, the average survival is about 4-6 weeks. In some rare cases it may take several months to progress. The good news is that with treatment the majority of patients will go into remission. This remission can be long lasting but unfortunately, as is the case with Ollie, lymphoma is rarely cured outright.

Treatments vary from basic drugs to complicated protocols using a variety of drugs. For the majority of dogs the drugs that are used have minimal to no side effects.

We first saw Ollie in January 2017. His lymph nodes remained enlarged and he had also become exercise intolerant, lethargic and had begun to go off his food. He was examined by one of our specialists and clinical staging was discussed to ascertain how widespread the lymphoma was. Ollie came into the hospital for blood tests, thoracic radiography and abdominal ultrasonography. Under a short general anaesthetic we also took fine needle aspirates from his liver, spleen and bone marrow. Cytology revealed evidence of lymphoma within the spleen, and liver but not within the bone marrow.

Once armed with all of this information, Ollie’s owners elected to commence a 25 week multi drug chemotherapy protocol. Ollie received his first treatment in early January. Apart from an isolated episode of vomiting 6 days after the first dose, there were no other reported side effects.

When Ollie returned for a check-up a week later complete remission had already been achieved. Ollie continued his course of treatment with regular blood tests and visits to the chemo clinic. In June 2017, Ollie was seen for his last and final dose of chemotherapy in his 25 week CHOP protocol. We were very glad to report that he was still in remission. Ollie’s owners were made aware that in most cases lymphoma sadly recurs, so they were shown how to palpate his lymph nodes to check for changes. They were asked to attend their local surgery to have a lymph node check in 4 and 12 weeks time to ensure he was still in complete remission.

For 4 months Ollie was in remission and remained well in himself. But at the end of October 2017 his owners called to say that his glands had enlarged. He was seen at his local vet the same day where bloods and cytology of lymph nodes were taken. Unfortunately, the results were consistent with a relapse of his lymphoma and he was referred back to Cave. Repeat staging and chemotherapy options were discussed and it was decided to pursue a second round of the chemotherapy protocol. Ollie received vincristine and went home with some medication.

When Ollie returned for his 2nd dose a week later, his lymph nodes had reduced in size and he was doing well. However, his neutrophil count (white blood cells) was too low for treatment so it was delayed until after a repeat blood test at the local vet showed a normal neutrophil count.

By week 3 of the second round of treatment, Ollie was once again in remission and remained so for the rest of the course. On 3rd May 2018, Ollie received his last chemotherapy dose of his 2nd CHOP protocol and his owners were once again advised to further monitor for possible relapses and to take him for checks at their local vets or with us in 1 month or earlier if concerned. If lymph node enlargement was detected, then bloods and cytology of the lymph nodes would be advised followed by possible rescue chemotherapy. 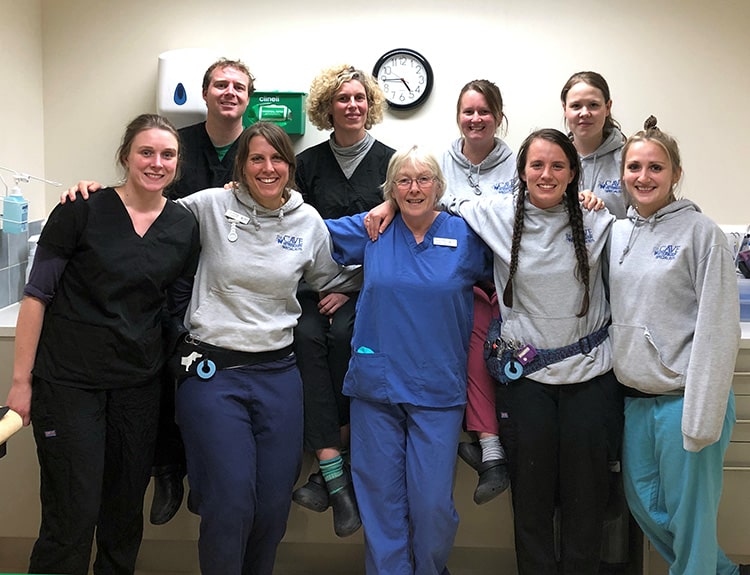 Ollie enjoyed a further healthy 8 months of remission until January 2019, when he experienced a further relapse and his lymph nodes were once again enlarged. He restarted treatment and by February 2019 was once again in complete remission. His final cycle of chemo in this third round of CHOP was in June 2019. He again remained in complete remission and although he would be expected to eventually relapse again, we hoped it would be a long way off.

After a further 3 months in remission, Ollie returned to Cave once again with a suspected relapse. Clinical examination confirmed moderately enlarged lymph nodes. Further chemotherapy options were discussed and it was agreed to change him to a lomustine rescue protocol. His first dose of lomustine was given orally. This unfortunately made him very neutropenic and he became poorly with sepsis. Once he had recovered, the chemotherapy drug was changed and he has since continued to flourish.

It has now been over 3 years since Ollie first attended Cave and was diagnosed with lymphoma. During this time he’s begun to feel like part of the family and we look forward to his enthusiastic visits. He vocalises his excitement and can often be seen actually scratching at the waiting room door in his eagerness to go through to the nurses and start treatment. He also loves the reception team and has been seen to ‘help’ behind the front desk.

Thanks to the Cave Chemo team and the dedication from his owners for their frequent trips and vigilance, Ollie’s story is a great example of how a terminal condition can be treated and managed long term with a good quality of life.

A word from Ollie’s family:

Ollie is a very special little spaniel – he was diagnosed with lymphoma three years ago and we want to thank the lovely people at Cave. We never realised that dogs could have chemotherapy – and he’s now had his fourth round! He loves coming here and meeting all his friends – from Linda and the team on reception to all the vets and nurses. No one’s handbag or waste bin is safe! He even scratches on the door of the consulting area and whimpers to get in. He knows all the staff by now – and we are sure they know him!

Ollie loves being the centre of attention – before he got ill he was a Pets as Therapy dog, and if he had opposable thumbs there’s no doubt he’d be working hard here at Cave helping everything to run smoothly. Meanwhile, he’s been enjoying life to the full – he’s chased deer in the woods in Bath, run off all day on holiday in Cornwall (right after his treatment!) and realised how much he enjoys camping (especially the abundance of picnic food). He even went viral on the internet after he made a gruesome discovery of a human foot in one of our local parks! Nothing keeps Ollie down – he always makes sure he’s the centre of attention. He’s even started going to our local church – he found the door open one morning on his walk and dashed in to see what was going on. Now he’s a regular!

He may only have little legs, but he’s the leader of our pack. We wouldn’t have been able to have all those experiences with him if it hadn’t been for our friends at Cave – so as big thank you from all of us, especially Ollie.
Simon, Nicky and Ollie xx 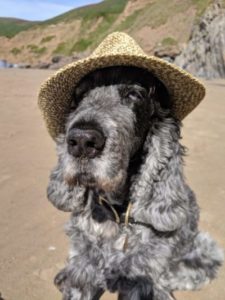