This month we’re focusing on the critical work our imaging team carry out when treating pets in our care.

To mark the occasion, we’ve put together this brief history of medical imaging. We hope you enjoy it! 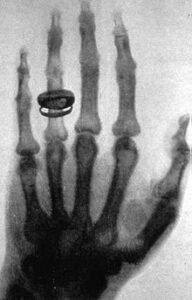 1. Wilhelm Conrad Röntgen discovered the X-ray on November 8, 1895. This is a big milestone in medical history and discovered by accident. Röntgen later earned a Nobel Prize in Physics for this discovery.

2. Röntgen captured the first ever X-ray picture using his wife’s hand, with her wedding ring on her finger. She was reportedly unimpressed by the image; by some accounts, she exclaimed “I have seen my death”.

3. The X means ‘unknown’ – X being used in mathematics to indicate an unknown quantity. 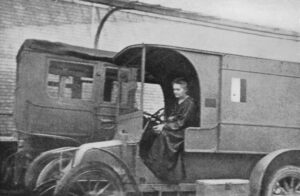 6.  Marie Curie was awarded the Nobel Prize for physics in 1903 but her second Nobel prize in 1911 was almost denied due to the scandal that she was having an affair with physicist Paul Langevin, and labelled a `tramp’ by the French press.

8. In 1897, Dr Norton obtained a radiograph of a man’s entire body in New York, fully clothed, with an exposure time of only 30 minutes. 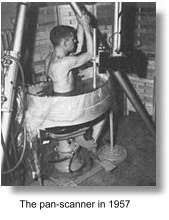 9. In the 1930s, there was a gradual standardisation of radiographic projections which was to culminate in the publication of ‘Positioning in Radiography’ (1st Edition) by K C Clark FSR in January 1939. This book (the Kitty Clarke Bible) is still a reference in all X-ray departments today.

10.  Ultrasound was first used for clinical purposes in 1956. Ultrasound is a type of imaging that uses high-frequency sounds waves rather than radiation.

11.  There was a major problem with the early approach, which depended on immersing the body part to be examined in degassed water (called water delay scanning) to avoid artefactual echoes from superficial structures.

12.  Ultrasound waves are too high for humans to hear, but they are within the range of what dogs and cats can hear. 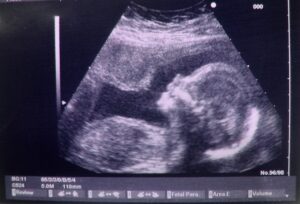 13.  It was soon discovered the X-ray’s ability to destroy certain cells and potential to cure cancers and bacteria

15.  CT was invented in 1972 by British engineer Godfrey Hounsfield of EMI Laboratories, England and by South Africa-born physicist Allan Cormack of Tufts University.

16.  The first patient brain-scan done through CT (Computed Tomography) scanning was performed in 1971. It was a frontal lobe tumour and was successfully operated on. Today, there are more than 78 million CT procedures performed each year. 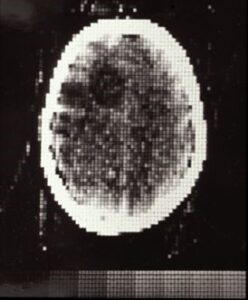 18.  Americans call it CAT (Computerised Axial Tomography) but the British traditionally don’t like the reference to their beloved pets, hence CT.

19.  The iodine in the contrast is a vasodilator, so often makes the patient feel as though they have wet themselves, as bladder region has good blood supply. 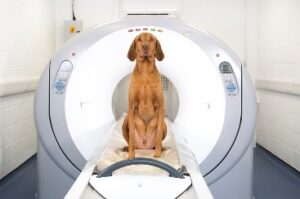 20.  The first Magnetic Resonance Imaging (MRI) scan of the human body was performed in 1977. Today, there are over 37 million MRI procedures performed each year.

21.  MRI has no radiation and uses radio waves to manipulate the magnetic position of the atoms of the body, which are picked up by a powerful antenna and sent to a computer. The computer performs millions of calculations.

22.  In the first and second Roentgen congresses in 1905/06, Professor R Eberlin presented papers on veterinary X-ray therapy. There was more evidence for therapy rather than diagnostic. Unfortunately – ‘More harm was done to the human assistant than good to the animal patient’.

23.  Veterinary CT scans have a timeline similar to that of ultrasounds. The first CT scans were used in human medicine in 1971, then began making their way into animal medicine in an experimental way about 10 years later.

24.  MRI machines were first used to help diagnose problems in humans in 1977 but “dogs were being snuck into human MRI facilities as late as the mid-90s.”

25.  A group of pugs is called a grumble (Nothing to do with medical imaging).