A ten-year-old cat has made a remarkable recovery from urgent surgery on a brain abscess, which vets believe had been caused by a bite on the head during a fight.

Here at Cave Veterinary Specialists, we carried out the delicate operation on a family pet called Thea, who seemed to have come off second best in the territorial cat fight.

Thea’s owners reported she was walking into objects, hissing at anyone who went near her or tried to touch her and pacing endlessly when they took her to the vets.

Her condition continued to worsen and she was referred to us, where experienced neurologists Tom Cardy and Alex Hamilton took charge of the case. 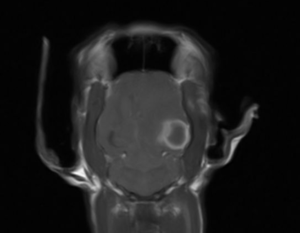 Tom said: “Thea presented with an almost two-week history of apparent blindness and not being herself, which had deteriorated over this time.

She had been given anti-inflammatories and antibiotics by the referring vets, which she did not respond to.

Thea had gone off her food and was unwilling to go outside, which is unusual for her.

An MRI scan revealed a mass in the left forebrain and we operated to perform a lateral craniectomy, which revealed the mass was an abscess.

There was also a small, fibrous tract which appeared to communicate with the abscess. This was probably a cat bite.

The abscess was incised, drained and flushed copiously with saline, the muscle was re-opposed and the removed bone from the craniectomy was not replaced.

Thea recovered well from surgery and was discharged three days later when she was able to see again, was no longer circling, and was eating and drinking well.”

Thea is now back at home after her ordeal but her owner Becca Sullivan, from Ilfracombe, Devon said it was a really traumatic time.

She said: “We were absolutely devastated by the diagnosis but she is part of our family and so we were willing to try anything to save her.

It was a huge worry, but Thea came through and recovered so quickly that within a week of being home she was back to her old self, bossing our other cat and dog about.

She’s now back out in the garden that she loves and is living a very happy life. Her sight isn’t as good as it was before the abscess, but considering all that’s happened, the fact she can see at all is amazing.

We cannot praise the staff at Cave enough for how supportive they were through the whole ordeal, keeping in regular contact with us throughout to ease our worries.

We are so grateful to the Cave neurology team for all their work in saving our little girl.”