COVID-19 update – OPEN FOR BUSINESS: To refer a case or book an appointment with one of our specialists, please contact us 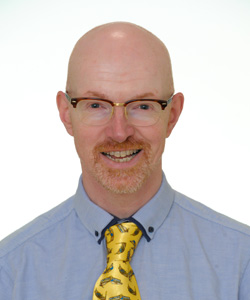 Andrew first came here to Cave Vets as a client when his cat Abi was referred in early 2017 for a Neurology appointment. Having worked for 28 years for the Police in administrative roles, Andrew wanted a change and applied for his role here on the Referral Team.

Abi the tabby stayed with him for nearly two more years, before Katy the kitty joined him in February 2019, a 2 year-old rescue cat from Cat’s Protection (found in a house with 18 other cats). She is a lovable bundle of fun, catching up on some much missed attention that she lacked in her first couple of years. Andrew remembers Abi the tabby with special affection too and as the cat that first introduced him to Cave Veterinary Specialists.